Advent of Buddhism in the region 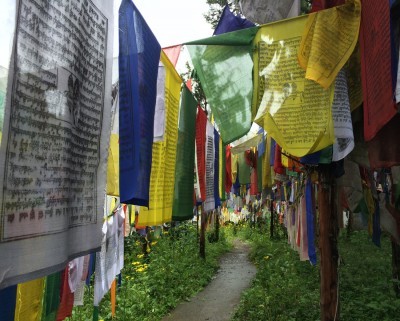 The Monpas are Buddhist by religion.They are followers of the Tibetan Mahayana School of Buddhism, with the majority following the Gelugpa Sect, with a small minority following the Nyingmapa sect.  It is said that before the advent of Buddhism in the region their religion was of a form of Shamanism generally referred to as Bon.  The Bon religion believed in the existence of numerous gods and spirits. It was believed that they had the power to cause disasters if they were offended or not pleased.The people had to take assistance of the Bonpo priests to protect themselves from their wrath as well as to   secure their favor. With the advent of Buddhism in the region people gradually give up their old religion and started adopting Buddhism.However, like the Tibetans, the Monpas did not completely supplant their old religion; rather they absorbed a number of these deities into the Buddhist Pantheon as protectors of the faith and are worshipped according to Buddhist rituals.

Gyaltse Tulku (the former Abbot of the Tawang Monastery) in his article the origin of Buddhism and the historical account of Mon, Tawang Monastery throws light on the advent of Buddhism to Monyul.  According to him, “in the 7th Century A.D., in Mon there lived a King called “Kalawangpo” and his Queen “Dakini Dowa Sangmo”.  He was the contemporary to the great Tibetan religious King Songtsang Gampo.  He first brought the light of the Buddhist teachings to Mon. 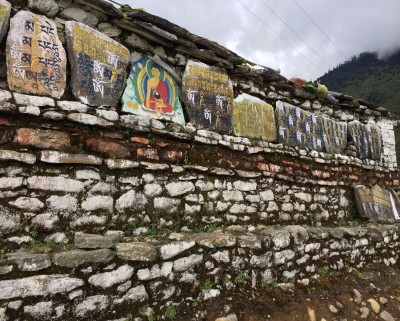 Mani – Prayer Walls are quite a common site in Tawang

It is quite probable that Buddhism began to filter into the Mon region from Tibet during that time.

Another Legend has it,that the Great Master, Guru Padmasambhava on invitation of the Tibetan King Trisong Deutsan (742–797 A.D) had travelled to Mon and had consecrated the land as Kyimo-jong– the Happy Valley. There are many places in the region that are believed to have been hallowed by his visit. The most famous being a place known as Tag-tsang. It is said that he stayed for some time to meditate in a cave at Tag-tsang in the Pangchen area to the North-west of Tawang. Legend has it that, on his arrival at the spot, he was received by a tiger and hence the place came to be known as Tag-tsang– the den of the tiger. Jig-tsang is another place where the Great Master is believed to have paid a visit where he had been received by a leopard, thus the site came to be known as Jig-tsang-the leopard’s den.

The establishment of the Tawang Monastery by Merag Lama in the year 1681 A.D. and the birth of His Holiness the 6th Dalai Lama in Urgelling near Tawang in the year of the Water Pig (1683 AD) gave a further impetus to the spread of Buddhism in the region.