The Monpa celebrate a number of festivals throughout the year. Majority of their festivals have a religious background & each festival has a history and significance of its own.The major festivals of the Monpa are described below :

Losar which means New Year, is the most important festival of the Monpa tribe, it falls either in the last part of February or the early part of March. It is marked with lots of gaiety and festivity which lasts the greater part of the lunar month which is the 1st Month of the lunar calendar. The Preparations for Losar start from the middle part of the twelfth month. It basically consists of managing sufficient meat, butter, cheese, flour, edible oil, chang, fruits, sweets, etc. New clothes are bought to be worn during the festival. A whole day is spent on making a special variety of fried loaves called ‘Bongp-nelap’ and fried biscuits called ‘Khab-se’ of various shape and forms. On the twenty ninth day of the twelfth lunar month, houses are swept and white washed. A special gruel called ‘guthug”(the 29th day gruel) is prepared for dinner.

On the thirtieth day of the twelfth lunar month, decoration of the house is done. Colored paper-flowers are hung from the ceilings; walls are adorned with drawings in flour or lime, depicting auspicious signs. Drawing of sun and moon, it is believed, would gather good fortune while drawing swastikas will keep away ghosts and other evil spirits. Biscuits, loaves, fresh and dry fruits, liquor, sweets, etc., are arranged finely on tables in the chapel, the kitchen as well as in the other rooms. These all form a good omen (tem-dre) for the upcoming year.

Early in the morning of the First day of the Losar, one or two members of the family first go to draw water from the nearby stream or water tap.  The water drawn on that early morning is believed to be especially purifying and sanctifying as it has been cleansed by the starry light of the night before.  Thereafter, donning themselves in their best dress and jewelry, all the family members go to the family chapel where they light lamps and recite prayers for a prosperous and calamity free year.  On the first day of Losar people do not go to others’ houses.  During this day, the family members spend the day enjoying drinks, good food and playing games.  Many people living in Tawang Township, however go to the Tawang Monastery for blessings.

From the Second day onwards, the people visit each other’s houses for greeting each other a Happy New Year.  The Guests are entertained with Sumptuous Meals.  Between the meals, the elders amuse themselves with games of Dice, Mahjong and Cards while kids play’thibi’ and many other games.  Youngsters organize archery competition.  Prayer flags are raised both vertically and horizontally on the third day.  While raising flags, a ritual of appeasement is offered in honor of their deities and the local protective deity. This is performed by holding flour in their hands and shouting “Lha so lo, ki ki so so lhagyal to” (May the Gods be victorious) and then throwing the flour towards the sky.  Yak and Achi Lhamu dances are performed in villages during the festival.  The festival goes on for 15 days.

A large 3-day festival known as the Gorsam Kora festival is observed every year at the Gorsam Stupa at Zemithang, during the last day of the first month of the lunar calendar.It is attended by thousands of people of the district and the nearby areas of Bhutan.

The Fourth month as per the lunar calendar is regarded as the holiest period for the Buddhists.  It normally falls in the month of May.  This month marks the birth of Lord Buddha, his attainment of supreme enlightenment and his passing into the state of nirvana. In thismonth prayers, circumambulations, prostrations are offered by the people to increase ones fortune and to gather more merit. A rite known as ‘Nyung-ne’ (alternate fast) is organized in the village Gompa to cleanse one’s sins and to earn merit.

On the fourth day of the sixth month i.e Dukpa Tse-She, the Lord Buddha delivered his first preaching on the Four Noble Truths at Deer Park in Sarnath. The day is spent by the locals visiting religious shrines and offering prayers.

The twenty second day of the ninth month of lunar calendar is celebrated as the day of Lord Buddha’s descent from Tushita, the realm of God. Lord Buddha is said to have travelled at the age of forty-one to Tushita, where his mother had taken rebirth as one of the Gods. In order to repay his mother’s kindness, he spent one rainy season retreat at Tushita, giving teachings to his mother and other Gods. The day is devoted to religious activities such as visiting temples, lighting lamps and chanting prayers.

The twenty fifth day of the tenth lunar month is the anniversary of the passing away of Je Tsong Khapa, the founder of the Gelukpa order of Tibetan Buddhism.  As a mark of devotion and to mourn his death, lamps are lighted in the evening on rooftops, varandahs of Gompas and private houses.

Torgya is a monastic festival held every year for three days starting from the twenty-eighth day of the eleventh lunar month, which generally falls in the middle to the last part of January. In order to drive away evil forces and to ward off any natural calamities so that the people may have a happy and prosperous life, a proposition rite of “Yamataka chakkhar zurgupa” is conducted and with this connotation the festival is called Torgya.  During the three days of Torgya, thousands of people converge at the Tawang Monastery in their colorful best, making the festival a carnival of colors.  The core event of the festival is the performance of Cham, a highly choreographed, sacred dance for three days which is performed by a select group of Monks dressed in magnificent robes and wearing masks representing various divinities and earthly characters in the courtyard of the Monastery to the accompaniment of beating drums and cymbals.

Prayers are offered in the main temple of the monastery for three days i.e. from twenty-sixth to twenty-eighth of the eleventh month. On the evening of the twenty-eighth, i.e. on the first day of the Torgya festival, the torma(sacrificial cake) is taken out in a procession to the southern gate of the Monastery where the torgya (casting of sacrificial cake) is performed. The performance of torgya symbolizes the destruction of all evil forces, so that the people may have a peaceful life, free from disease, hunger and all sorts of calamities in the coming year.

Every third year, the festival is celebrated on a very grand scale and is known asDung-Gyur.  During Dung-gyur the monks conduct the Mani Dung Drub ritual. 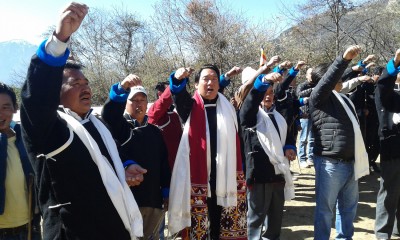 Ritual of Appeasement During the Third day of Losar 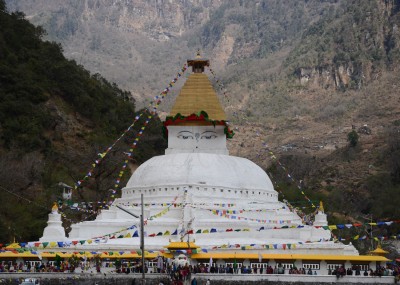 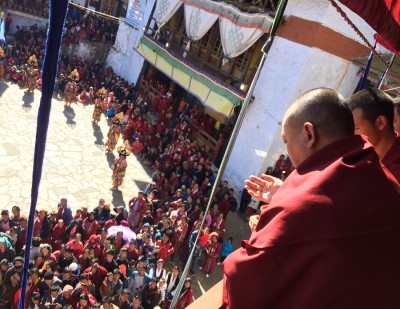 Abbot giving his blessings during Cham at Torgya 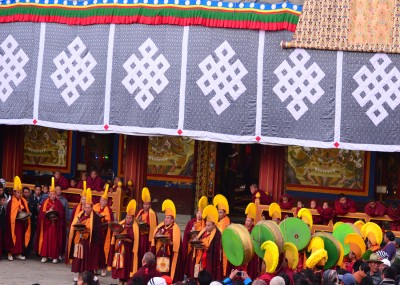 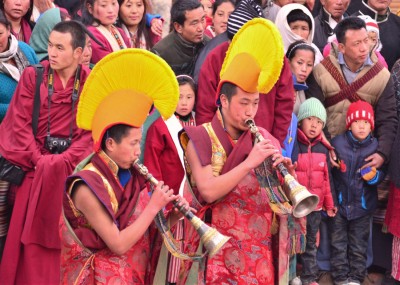 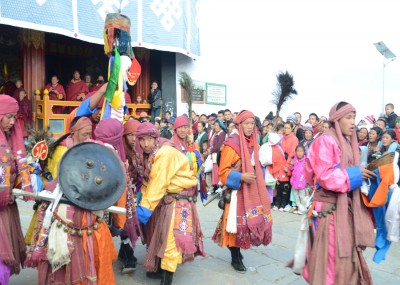 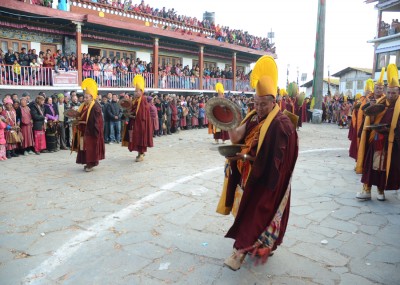 On the tenth day of the fifth month of lunar calendar called ‘Tseb-chu’ the birth anniversary of Guru Padmasambhava is observed at Khinmey Gonpa.  On this day, an initiation (wang) is bestowed to the devotees by Thegtse Rimpoche.  On two days prior to it, the monks of the Khinmey Gonpa perform various sacred dances, known as cham.  The dances bring blessings upon the onlookers; protect them from misfortune and evil influences.