The religious dances (cham) form an important part of the religious rituals of the Monpa people.  During the Torgya Festival, the dances are performed with great sanctity and spiritual quest, by selected Monks of the Tawang Monastery as a part of the Torgya rituals which go on for three days.Before going into details about the actual cham, a mention of the outfits of the dancers needs to be made.  The most important object of the dancer’s attire is the mask (bak).  The masks are carved out of wood and are painted in different colours.  They are often double the size of a human face.  The costumes used in the cham are mostly made of brocade and silk.  The outfit of a dancer representing a deity of higher rank usually consists of a gown (phodka) with long, broad sleeves and a poncho-like tippet (stod le).  Some dancers wear a circular breastplate called melongbearing in its center, the ‘seed’ syllable (sa bon) of the deity, which the dancer personifies.  The weapons and other objects which the dancers carry in their hands are the characteristic attributes which Buddhist iconography assigns to a particular God or Goddess.  The common objects carried by the dancers in their hands are the skull cup (bandha),damaru, vajra(dorjee), dagger (phurpa), sword (raldri), club in the shape of a mummified corpse (thodthrom), bell (drill bu) or a flag.

Another important component of the chamis the orchestra.  The orchestra players are attired in the usual monks’ dress.  The musical instruments used by the orchestra are the same instruments used in normal religious ceremonies, such as long trumpets (dungchen), clarinet (gyaling), conch shells (dungkar), damaru, drums (dha) and cymbals (silnyen and bubcha).  Their beats indicate the rhythm of the dance.

A total of 22 different kinds of Cham are performed during the festival some of which are described as under:

In the early mornings of the three days of festival, a dancer in fully ordained monk’s dress performs the Phacham by wearing a boar’s mask (Pha=boar; cham=dance). This dance is performed in order to prepare the ground for performance of cham by pacifying the malice of the gods and spirits so that perfect conditions could be created for performance.

Shanag cham is performed by twelve dancers wearing phodka, a kind of richly embroidered kaftan reaching to the ankles and pang kheb, a colorful richly embroidered apron. The dancers wear a black, broad-brimmed hat from which the dance derived its name Shanag(black hat). The dancers personify Tantric priests. After executing the cham for some time, four dancers representing Dharmaraja Kalarupa and his consort, Chamundi accompanied by their attendants appear on the scene dancing solemnly. They are greeted by the Abbot of the Tawang Monastery by offering scarves from the balcony above. After the dance is over, the Abbot; senior lamas, all the above dancers and the procession of people proceed towards the southern gate of the monastery to participate in the Torgya rites.

This cham is performed by eleven dancers each holding a ritual bell in one hand and damaru in the other. They represent dakinis who are the protectors of the Buddha Dharma. Gon-Nyin cham is generally performed when an important religious venture is to be undertaken like the construction of a monastery or when a holy statue is to be installed and consecrated. It is performed to distract the attention of the demons who create obstacles to the advancement of the Buddhist doctrine. It is believed that the demons get so engrossed in watching this dance that they forget to create obstacles in the work.

Wearing fearful masks and dressed magnificently, a group of twelve dancers representing the retinue of Palden Lhamo (Sri Devi) perform this cham signifying the clearance of ground for her appearance. A masked dancer representing Palden Lhamo comes out from the main temple dancing solemnly. Her attendants escort her. Before entering the dance arena, the Abbot of Tawang Monastery offers scarves to Palden Lhamo and her attendants from the balcony above. Reaching the dancing square, she is ushered to the throne arranged for her. Seir-Kyem (libation) is then offered to her by some senior monks. This dance is performed to invoke the blessing of Palden Lhamo, the principal guardian deity of Tawang Monastery.

Wearing fierce looking masks, this dance is performed by two dancers holding small flags in their right hands and skull cup in the left hands.  It symbolizes the taking possession and safeguarding the ground which is to be used for performance of sacred dances.

Dung-cham is performed for the prosperity of all sentient beings.  This cham is performed by wearing mask of different animal figures.  The dancers represent the retinue of Chamsing, a protective deity.

For peace and prosperity in the world, twelve dancers dressed in ceremonial monks’ robes perform this cham.Apart from the above sacred dances, many shabbily dressed clowns play their part as interludes, besides entertaining the public with mimes, they also teach moral lessons. 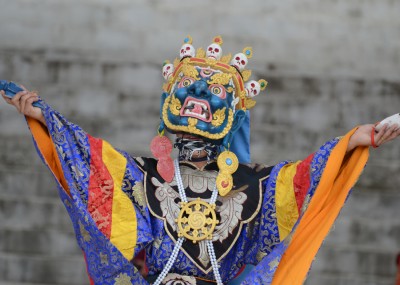 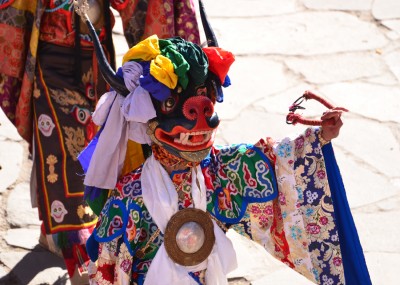 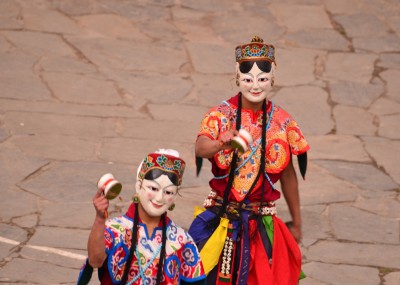 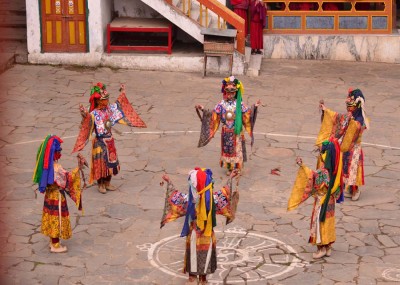 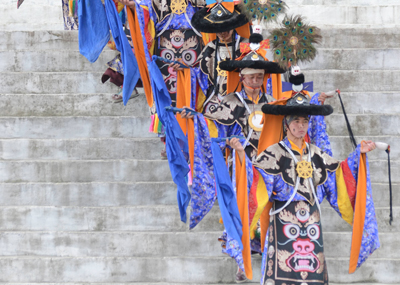 Shanag cham being performed at Khinmey