The Monpas have their own distinctive attire, which is well suited to the Climatic conditions of Tawang. The traditional dress of the males consists of a short woolen trouser called Kangnom and a full length woolen trouser called Dhorna. The traditional male shirt is called Toh-thung. Over the shirt they wear a black woolen coat called ali-phudhung or khanjar. In cold days a thick woolen red cloak called Chupa is worn, it is tied at the waist with a sash called khichin.  The Monpa’s also wear a sleeveless coat called Paktza.

The women wear a sleeveless gown of light red color with white stripes known as the Shingka made up of coarse endi silk.A red or black coloured square woolen cloth is tied at the rear of the waist known as Teng-ngakyima.On top of the shingka an endi silk shirt, known as the allentoh-thung is worn, which is open from the front.Over it another shirt called kyanchen is worn.It is a lavishly embroidered full sleeve maroon colour shirt with opening in the front like the aleentoh-thung. They also wear a woolen coat called baitoh-thung. Many Monpa women also wear the Tibetan dress, which consists of a full sleeve blouse known as the honju and a loose gown known as the Chupa. In the Tibetan dress, the married women also tie a multi coloured apron in the front ,known as pangten.

The traditional boots of the Monpa are known as Tsem-lham,which are common for both men and women. They are made up of woolen cloth which reaches till the knees. The soles of the shoes are made up of yak or cowhide; these are flat and are tied at the top with garters.

A unique aspect of the Monpa dress is the distinctive type of headgear worn by the people, based on the region of their stay. The most common headgear is called as Ngama-shom.It is made of yak’s hair, which is in the shape of a skull.It has no brim,but has five tapering points of about three inches in length twisted out from the body. The people of Zimithang-both men and women wear a different type of cap known as the seir-sha. It is round in shape and red and yellow in color.The women of Mago-Thingbu wear a distinctive cap known as the nga-sha. Like other caps, it is made up of Yak’s hair and has 18-23 tapering points twisted out from the material to form an unusual brim. Both Monpa men and women also wear Tibetan caps of various designs.

The Monpas possess various kinds of ornaments for their personal adornment. The stock of ornaments also serves as an index of their wealth. Their ornaments are similar to the ornaments of the Tibetans.

Son-dhup– It is a finger ring made of gold,silver or some other metal.Most of the rings are studded at the top with precious stones like turquoise, red coral or onyx.Both men and women wear finger rings.The Men also wear ivory rings called thekor on their right thumb.

Nyon-dhup– It is a bangle made up of gold,silver or other metal.Only women wear it.

Kaykor-It is a necklace or red corals interspersed with onyx,pearls and turquoise. Only women wear it. The women of Mago-Thingbu area wear a string of Amber beads known as poshephre-nga,which hangs down from the hair, on either side of the forehead but not from the neck.

Gau-It is a charm box of various shapes & sizes, normally made up of silver and studded with turquoise or other precious stones. Inside the gau a talisman is kept to protect the wearer from evil,illnesses etc.

Along-It is an earring made of gold or silver.Amongst the Monpas only women wear earrings.

Khraseng-It is a silver clip, which fastens the hair of women at the top of the head.

Grokha-It is as silver brooch mostly in the shape of a butterfly or a bird, which is worn only by Women 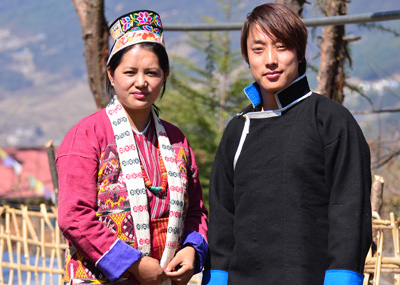 A monpa couple in traditional attire 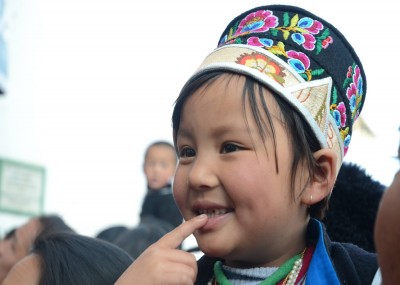 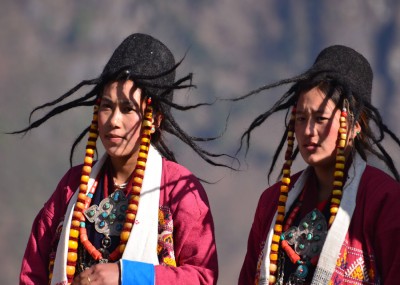 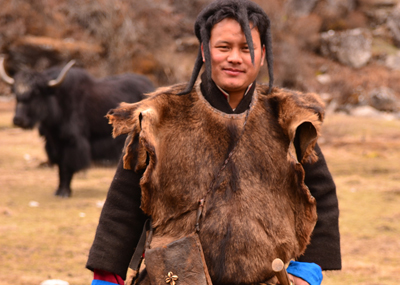 A Brokpa with a Yak in background