Tawang has a  number of high altitude lakes. Locals say that there are in total 108 lakes spread all over the district. The highest concentration of lakes is on the eastern and northern borders of the district.

The lake PT Tso,as is known by all the residents of  Tawang, is the spot of natural union of beauty of the mountains with the expanse of the grasslands. With every week the lake and its surroundings take a different colour and the scene changes significantly.It is not only a lake,it is a dream like imagination because of the splendid views it captures in that setting. The magnificent symmetrical fir forest of the mountains puts a mist of a green glow on the water of the lake. The carpet of the yellow flowers especially of the primula species are found in all the open pockets around the lake and are interspersed by the rhododendron patches,blooming with the grandeur of the mountains forming the background. The pink terraces of the rhododendrons ,the yellow mat of the primulas under the clear blue roof give the lake an unusual pristine beauty. With the advent of winter at the horizon,the blue sky with floating white clouds at the top,the snow capped mountains all around the lake and the embrace of the rhododendron forest give the lake its colour and turn it into a sleeping beauty awaiting the arrival of her beloved. Situated at a distance of around 18 kilometers from Tawang ,the place is a major attraction all around the year.

Stepping into the lap of the nature is always enchanting and challenging. The stream water from the mountains nearby drains into the depression ,creating the water mass ,and a spring also emerges from the lake. The water mass surrounded by the lofty mountains, there at the Sangetsar,it holds the beauty and the tranquility of the snow capped mountain tops ,the colours of the blue sky ,the sound of the birds ,the call of the distant land which urged the soul searchers to come near it and enjoy the serenity and the difference. The lake was naturally created by the depression that formed due to an earthquake decades back. It still has the dry vegetation on its bed. The tree stumps give it a totally unique look,as if in the waters a new range of trees ,devoid of green leaves have come up. The lake is about 45 kilometers away from the township and can be approached by a motorable road. On the way from Tawang , the beautiful lakes like PT Tso and other big lakes can be seen ,apart from the majestic mountain ranges.

Located at about 9000 ft. falling under Shocktsen village is one of the most popular lakes under Zemithang circle. The lake is believed to possess spiritual power, which can be seen clearly and visibly by only those person who has a pure heart otherwise it remains blanketed under fog.

The Thangaphel tso is situated in a village named Thongleng in Tawang. The lake was thought to have been blessed by Guru Padmasambhava. This is one among the holiest tso for the people of monyul.

Two enchanting lakes exist near the Sela mountain pass which appear to be welcoming you to Tawang. The famous one is the Sela lake. Sighting a pair of swan in the Sela lake is said to be a good omen.

This lake once hallowed by the presence of Guru Lopon Rimpoche,is situated adjacent to the Banggachhang gonpa.The road to the lake remains mostly closed due to snowfall on the way.The lake is approached both by trekking and vehicle from Sela upto the gonpa.The lake os associated with the myths of the Monpa society and the beiefs of the pilgrims.The stories associated with this lake are about seeing the candle lights in the waters of the lake and the gonpa in it.The pious and clear minded pilgrims get the chance to see the miracles in the waters of the lake.Situated at a distance of about 100 kilometers from Tawang township ,the lake is near the Sela pass.The journey itself is challenging and exciting,and the other lakes and mountains around it are also extremely beautiful.

Some of the other important lakes are Nagula Tso, Kham-Kher Tso, Klemta Tso etc. 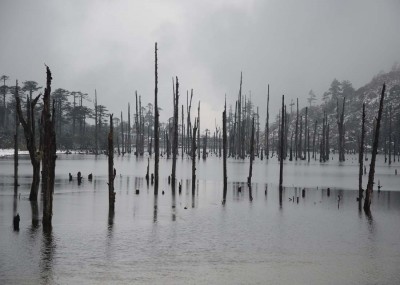 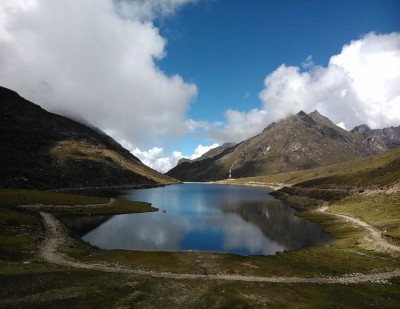 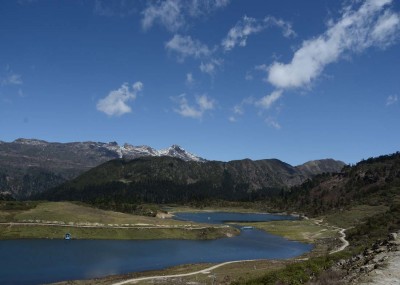 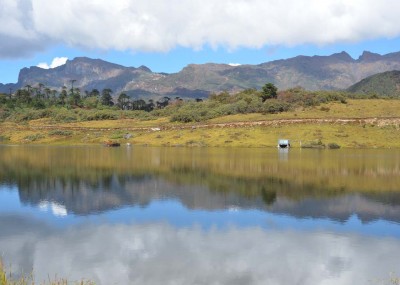 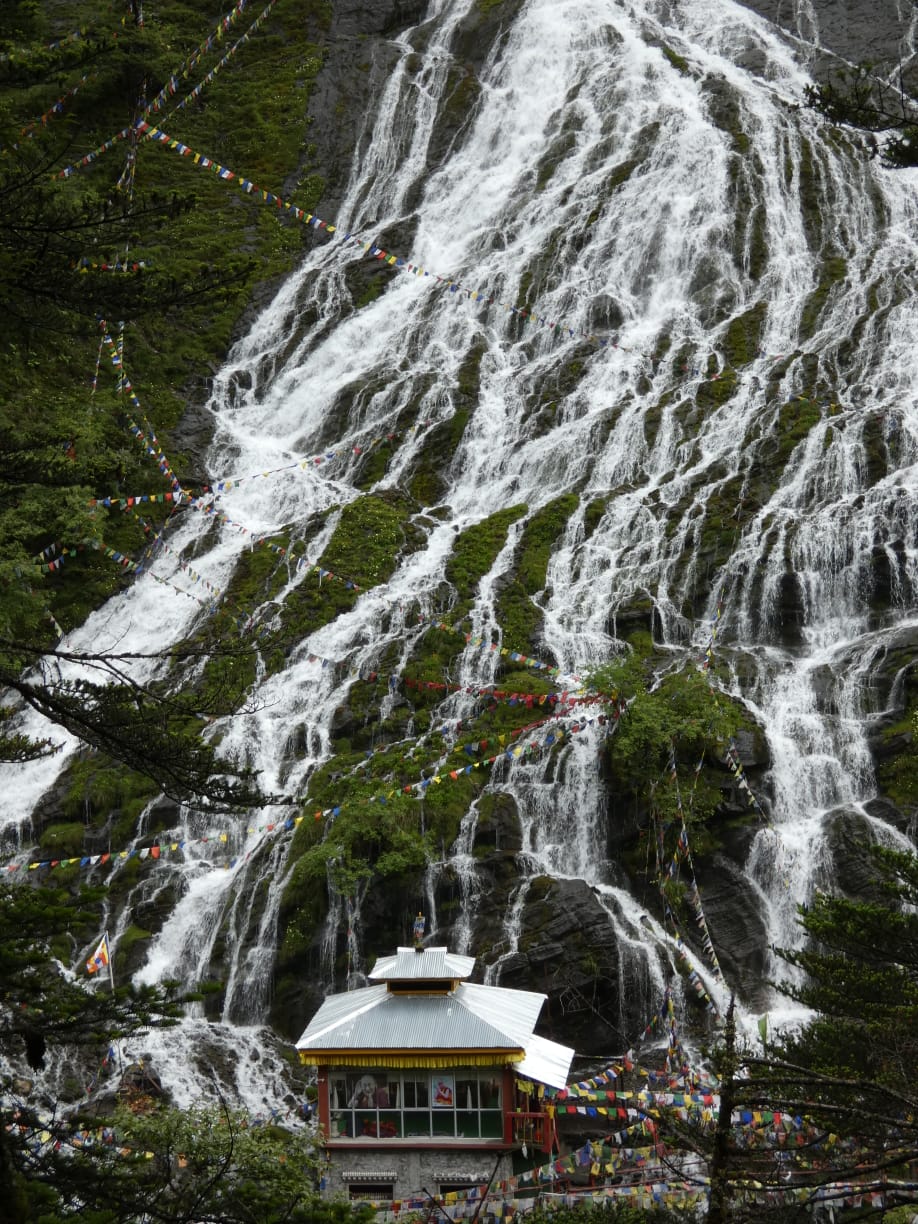 The green landscape of Tawang Sis broken here and there by beautiful waterfalls that leaps out of the hillsides in plumes of white. Some of the famous waterfalls are mentioned below.

Chumi Gyatse Temple (Holy Water fall Temple)
Chumi Gyatse Temple at Holy water fall is a collection of 108 waterfall streams.It is at a location which is 4 hrs from Tawang City near Tsechu Hot water stream at Tsechu village (Damteng). Chumi Gyatse Temple are highly revered for the Monpas tribe (Tibetan Buddhist) of the state.Its water is highly purified which has various medicinal values.

At a place called Nyamseir is the Phong-phongma waterfall popularly known as Nuranang waterfall. It is at a distance of 40 km from Tawang town and 2 km down hill drive from Jang. One can see the beauty and majesty of the Nuranang waterfall near Tawangchu river at Jang. To say the least, it is thunderous and enthralling like an oration.

Bapteng-Kang waterfall is another famous waterfall which is at a distance of 80 km from Tawang to Zemithang  and 30 km from Lumla. It has a height of 100 ft. and is popularly known as BTK waterfall. 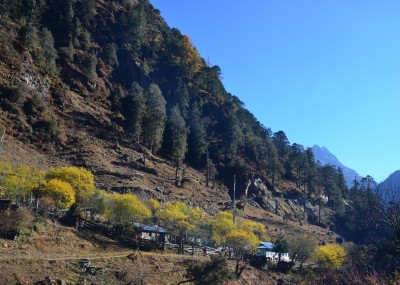 There are numerous Hot springs at Mago situated all along the river bank of Goshuchu. The hot springs at TopkeyMago is a beautiful Hot spring, with crystal clear water flowing into the bond in huge volumes and an ideal temperature suitable for a dip. However due to it’s remote location (around 3 hours drive from Tawang plus 6-7 hours of Trek) it is suitable for the most adventurers and physically fit tourists particularly those who are interested in Trekking and Hiking.

Thingbu village is blessed with a beautiful Hot spring in the river of Mago Chu at Nguikteng about 20 kms  from Jang. It is not very difficult to reach these hot springs as they require a drive of around 3 hours from Tawang / 1 hours from Jang with a short trek of about 20 minutes thus these are suitable for most travelers.

The Tsechu hot spring is around 6 hours drive from Tawang town.  Alternatively, the hot water spring can also be reached by travelling by light motor vehicle for 3 hrsupto Sarong Gonpa and from there one has to do a light trek for about 4 hours. The route has very attractive landscapes and beautiful valleys. One can also halt at the Tourist Lodge located at Tsechu after taking a dip in the Hot spring.