Jangchub Choeling, popularly known as the Gyang-gong Ani Gonpa, is a nunnery situated at a distance of about 10 kms. north-west of Tawang monastery.  It is built on a middle slope of a hill surrounded by pristine beauty.  Legend has it that Merak Lama Lodroe Gyatso had a sister who was a nun.  As no woman could reside in the Tawang monastery, he constructed a meditation cave for his sister.  She was provided provisions from the Tawang monastery.  As the number of nuns residing in the meditation retreat constructed by Merak Lama for his sister increased with the passage of time, it eventually turned into a nunnery and came to be known as Jangchub Choeling / Gyangong Ani gonpa.

The Bramadung Chung Ani-Gompa which is situated around 10 kilometers away from the Tawang monastery is said to be the oldest Ani-Gompa of Tawang was said to be constructed by lama Karchen Yeshi Gelek of Tibet during the 16th century. This ani gonpa is situated at a much secluded place and is inhabited by around forty five anis. The anis sustain on donations and offerings from the devotees and are not getting any direct support from the Tawang monastery. The Ani-gompa is easily accessible by road.

About five kilometres southeast of Tawang township, by the national highway is the Urgelling monastery founded by Ugyen Sangpo. It is said that the temple, was initially quite modest in construction.  However, when the royal father was at his deathbed, he wished that the gonpa be renovated. Unfortunately, the enlarged monastery was sacked around 1714,by the Dzongar Mongols, who were averse to the Nyingmapa sect, during the course of a campaign against Bhutan.The present Urgylling gompa is a modest one, of a little more than 180 square metres in plinth area.  It is a double storied structure.   Rows of prayer-wheels are set in niches almost all along the outer walls of the temple.  The northern side of the ground floor houses nine chortens. There is a two-tiered altar housing the statues of Buddha Shakyamuni as the chief image, the Sixth Dalai Lama, Je Yabse sum, twenty-one Taras, Maitreya, The Fifth Dalai Lama and other divinities along with beautiful Murals and Thangka paintings adorning the inner walls.Every year on the 6th of July, the birthday of the 14th Dalai Lama is celebrated with great fanfare at the Gompa, by the locals.

Khinmey Nyingma Monastery also known as Sang-ngag-choekhorling, is located in the village of Khinmey near the headquarters of the Tawang District in Arunachal Pradesh. The name Khinmey comes from the Monpa word Khi-Ket-Nyan-Mey, literally meaning a place for listening to the sound of barking dogs. Legend has it that before the establishment of the Khinmey Monastery, the area was covered by a thick forest teeming with wild animals. Hunters let loose their dogs in the forest and followed their dogs by listening to their barks. Story has it that one day while hunting Sonam Rinchin, a legendary hunter from Yubu village, met Rev. Kundun Sange Yeshe, the founder of the monastery, who was meditating in the vicinity. He (soon,) gave up hunting and became an ardent disciple of Rev. Kundun Sange Yeshe. The area belonged to Sonam Rinchin and he offered it for the establishment of the monastery.

As a result the Khinmey Nyingma monastery was founded by Rev. Kundun Sange Yeshe, the first Thegtse Rinpoche in the year 1440 AD. He was one of the most brilliant disciples of the Great Guru Terton Pema Lingpa. After receiving and comprehending the essence of Buddha Dharma from him, Rinpoche migrated at Khinmey for meditation. It was during the course of that meditation that Sonam Rinchin had offered the land for the establishment of the monastery. Since then all the reincarnations of Thegtse Rinpoche have been receiving the rich Mindrolling tradition and preserving and propagating mainly in the region. His Eminence the 14th Thegtse Rinpoche, Gyurmey Losel Gyatso (present Rinpoche) received all the traditions of the Nyingma sect, especially the Mindrolling traditions from H.H The 11th Mindolling Trichen.The 14th Thegtse Rinpoche [Present Rinpoche] with the motivation to instill the Buddhist system of knowledge and more particularly of the Tantric tradition instituted the large community of monks. The monastery has undergone several reconstructions to give compatible accommodations to rising number of the monk students. At present, more than hundred monk students from Monpas, Bhutanese and Indian Nepalese communities have been studying both the ancient Buddhist classics and modern subjects under the guidance of the Rinpoche. For his distinguished service to the society, the Rinpoche was conferred with the Padma Award, in the category of “Padma Shri” by the Govt. of India, this year.

The Sarong Gompa was founded by the 1st Sarong Rinpoche, who traces himself back to Phuntsok Drakpa of Shyaro village, a monk of the Tawang Monastery. This was most likely after the 1714 Tibet-Bhutan war, when Lajang Khan’s armies passed through Tawang to Bhutan. Due to his regret in leading the army, Phuntsok Drakpa decided to remain in retreat in the Sarong valley for the rest of his life. The present Sarong Gonpa, alias Tashi Samten Choeding Gompatse, was built in 1813 by the 3rd Sarong Rinpoche, Tenpa Rinchen. The present 5th Sarong Rinpoche is based at Sarong Gonpa.

Baggajang gonpa is situated 18 km south of Sela Pass.  In the guidebook written by Lopon Rigzin Thinley of Druk Tsong-Tsong it is written that “It is one of the holiest places in Lho Mon and is regarded as the second “Tsari’. This holy site has some extraordinary holy lakes like the plar-tsang (Soul Lake) of Dorjee Phagmo, plar-tsang of Lhamo, plar-tsang of Rigsum Gonpo, etc. Many mystical stories like seeing burning butter-lamps, apparition of gonpa, fluttering religious flags, etc. are woven around these lakes.The Gompa has images of Lopon Rinpoche with his consorts, Vajrayogini of human size, Avalokestesvara, Green Tara, White Tara etc.

It is the home of Gyalyum Tsewang Lhamo, the royal mother of Gyalwa Tsangyang Gyatso, His Holiness,the VIth Dalai Lama. The home is about 15 km from the main town in Bekhar under Kitpi Circle.  The house still preserves some antiques associated with the 6th Dalai Lama and his family. At the moment the house is under the renovation and a new Gompa is also being constructed beside the house in which all the antiques would be displayed for the tourists and pilgrims. 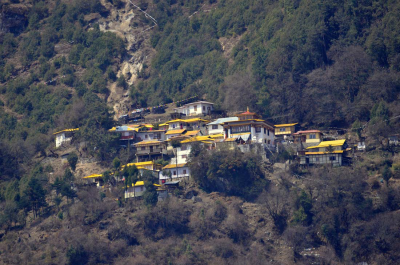 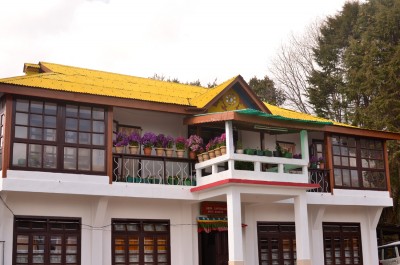 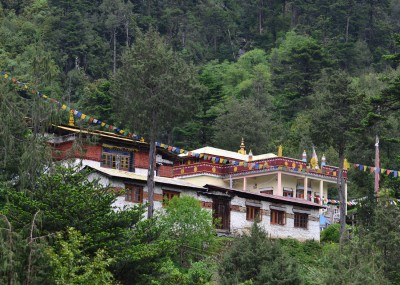 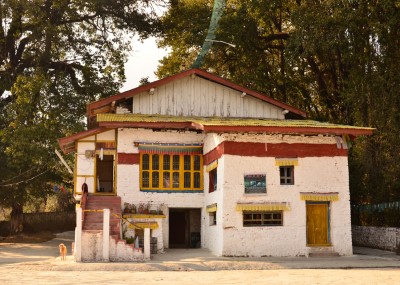 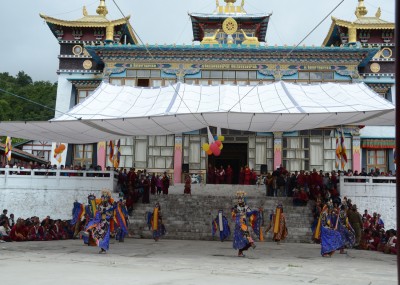 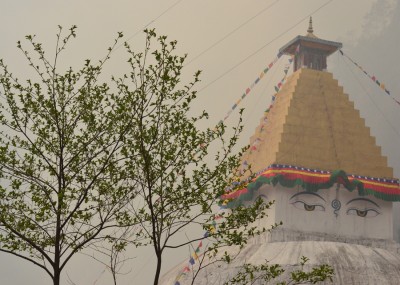 It is located in the Northern portion of the district, near the PT Tso Lake, on the road going towards Bumla. Legend has it that when Tsangyang Gyatso and his parents were being moved to a safer place called Sha’uk, the boy, on reaching at the pass below the Panggateng Lake said, “Dismount me from the horse here.  I want to have a last look at my country and home”.  It is said that he took rest there for a while, sipping a cup of milk.  When the time came to move forward, gazing towards Tawang, he put his right foot on a slab of rock leaving the impression of his foot miraculously imprinted on it.  The footprint attributed to him can still be seen at that very site, which is known to the local people as ‘Lamae Shabje’ (Lama’s footprint).

This gompa is situated at a distance of around 30 kilometers to the west of Tawang, towards the Geshila road, just above the Khirmu village. Around 30 Anis, depending on the donations and the contributions from the villagers, inhabit this gonpa. The new building was constructed during 1960 near the existing old building. The Ani gonpa is located at a commanding position overlooking the villages and is easily accessible by road.

Situated 92 Kms. from Tawang at Zemithang is this unique and magnificent Stupa looming high into the sky. It is said to have been constructed in the thirteenth century by Lama Prathar who belonged to Kharman village of Zimithang.Towering at 93 feet with a base of about 186 feet,this Stupa is modeled after the Boudinath Stupa of Nepal,which is popularly known as Bayul Chorten. Legend has it that the sketched outline of the great Stupa of Boudhinath was carved on a radish and was brought all the way from Nepal to Zemithang as a reference, however due to the prolonged journey, the radish shrank and the model of the Stupa also got shriveled a little.As a result of the shrinkage the Gorsam Stupa,though a replica of its counterpart in Nepal, is slightly more flattened and less pointed on the top.

The Tiger’s Den as it is called, is located about 50 kms. from Tawang, nestled amongst breath-taking surroundings of coniferous forests and lofty mountains. It is believed to have been hallowed by the visit of Guru Padmasambhava in the Eight century. There are marks on the floor believed to be the footprints of the Master and his horse. It is said that when the Guru reached the spot a tiger received him, so the place came to locally known as Tak-tsang (Tiger’s den). A temple was later constructed at this site and came to be known as the Tak-tsang Gonpa.

Situated near Jang,the Kyiney Gonpa is also known as the Kyimnas Gonpa. Locally Kyid means comfortable and Ney means place, thus, the literary meaning of the location is the place of comfort. This Gonpa is believed to have been founded by 3rdGyalwa Karmapa Rangjung Dorje (1284-1339), on his return from Tibet in the 14th Century. Due to it’s sacredness, people from all part of the region come to visit this Gonpa regularly for their prayers, inner peace and to take blessings.