The Famous Gaden Namgyal Lhatse roughly translated as “The peak of the heavenly abode of joyfulness and complete victory” and, popularly known as the Tawang Monastery was founded by Merak Lama Lodre Gyatso in the year 1680-81. The monastery stands on the spur of a hill, about 10,000 feet above sea level having ravines in the south and west, a narrow ridge on the north and gradual slope on the east. The monastery apart from being is the fountain-head of the spiritual life of the people of this region is also the most important Socio-Cultural Institute having tremendous influence on the culture and day-to-day life of the inhabitants of the region.

The Main gate of the monastery is located further south, it is fitted with huge doors and is set in the northern wall of the monastery. There is another gate near the southern end of this wall which is fitted with a huge door. Near it there are two slits in the wall to see out through all along the outer side of the eastern wall connecting the gate to the kakaling. It is said that the yarn given by the Vth Dalai Lama to Merak Lama enclosed the area bounded by the four walls.

A paved path runs from the main gate towards the rear of the monastery leading to a stone slabbed court. Religious dances (Cham) and outdoor ceremonies are held in this court. The entire eastern half of the monastery is covered with sixty residential quarter’s called (Sha/Hut) for housing the resident monks. Each of these dormitories has been constructed by a group of villagers on voluntary basis. They also carry out the repairs and are responsible for its maintenance.

The most imposing building of the monastery is the assembly hall known as Dukhang. It is a three-storied building standing on the northern side of the court and houses the template and the Labrang (The establishment of the Abbot.) The inner walls of the Dukhang are painted with murals of various divinities and saints. The altar occupies the entire northern wall of the hall. On the left of the alter is the silver casket wrapped in silk containing the Thangkas of Goddess Sri Devi (Palden Lhamo) the principle deity of the monastery, which was given to Merak Lama by the Vth Dalai Lama. The said painting came to be known as Ja-Droi-Ma, which means that it had the warmth of a bird, symbolizing that the Thangka was living.

A colossal richly gilded statue of Lord Buddha occupies the middle of the northern side. It is seated on a lotus throne flanked by his two Principal attendants Maudgalyayana and Sariputra, each with a staff and begging bowl in hand.  It is the largest image of the monastery and is about 25 feet high. Except for the northern wall of the hall, all the other walls are adorned with beautiful life-size frescos of various divinities and saints.

For the benefit of the tourists and visitors, an informative museum with a number of old artifacts and a photo gallery has been setup near the back gate of the monastery. 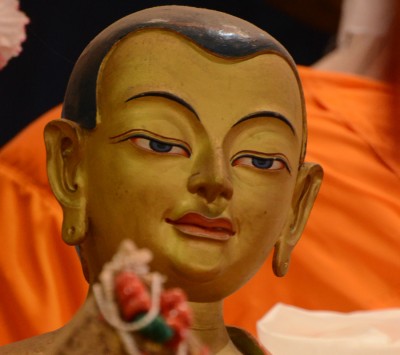 idol of Sariputra in Dukhang 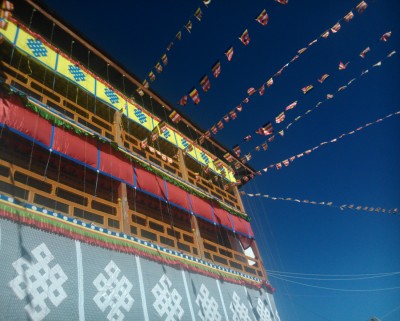 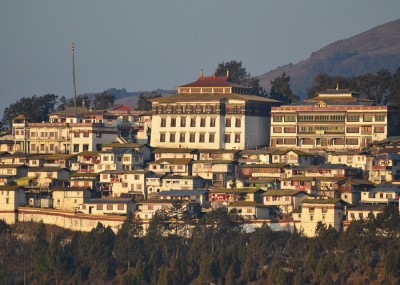 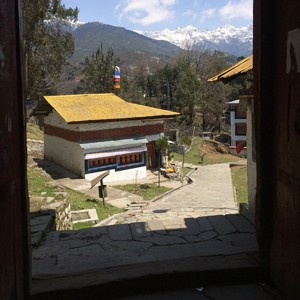 View from inner gate of the monastery towards the Kakaling 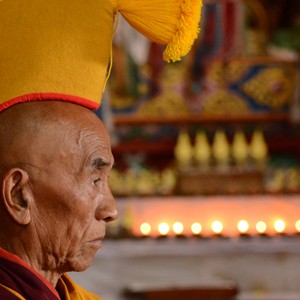 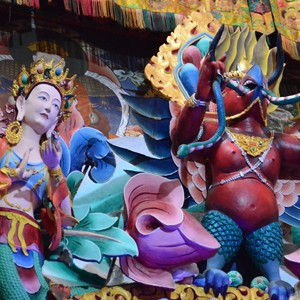 Mural in the Dukhang