Pantomimes are the media through which a mythical story is narrated or a moral lesson is taught.  These are generally performed during Losar and other occasions but can also be performed at any other time of the year. Each pantomime / dance drama has a fascinating story which is described briefly:

The development of this dance-drama is attributed to Thangtong Gyalpo who was a highly respected Lama, Teacher and self-made bridge Engineer of the fourteenth century. It is one of the prominent folk dances of the Monpa and Sherdukpen Tribes of Western Arunachal Pradesh. The Tibetan version of Ramayana is depicted through this dance-drama. This is a masked dance, which was evolved approximately 600 years before. It has its own style of dance and mime act. Achi Lhamu involves five characters each having a mythological origin. They are ‘Gyeli’, ‘Nyapa’ , ‘Nyaro’  and two other female characters ‘Lhamo’ and ‘Lhum’. ‘Lhamo’ was the fairy from heaven who later became the Queen of Gyeli. The dance also depicts the marriage ceremony of Lhamo with King Chhoegay Norzang.

The dance drama is performed for 4 to 5 days through a unique style of song, dialogue, dance and pantomime.  The musical instruments played to the accompaniment of the dance are the drums and cymbals.

This dance is performed during the Losar and festive occasions. Legend has it that a saint named Tenteling was performing meditation on Mount Gangri-Karpo. The saint’s meditation was witnessed by the two snow-lions living on that mountain. Impressed by the saint’s religiosity, the lions offered their milk for the sustenance of the saint and consequently became his good friends. This dance is performed to commemorate the saint and the good deeds of the snow lions.

One of the most popular pantomimes of the Monpa tribe is the yak pantomime.  In this dance, a dummy yak is made by covering the body-frame made of bamboo with black cloth and setting a wooden head on it.  An image of a country-guardian (sungma) sits on its back.  The body frame is carried about by two men concealed within it who dance according to the beats of the drum and cymbals.  Four masked men representing Theopa Gali, who was said to have discovered the yak, and his family members, dance round the yak narrating in the form of song the romantic story of the origin of yak-it’s discovery and how it’s integration brought permanent source of wealth and happiness to the entire community. 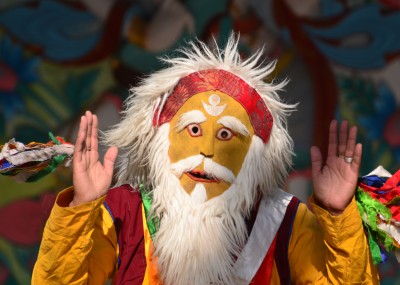 Performer dressed as lama dransonang in  in Snow lion dance 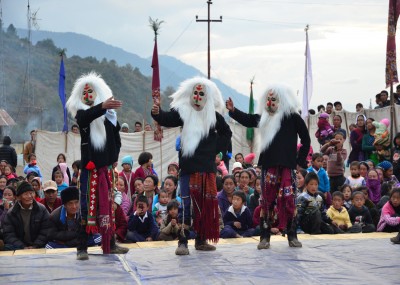 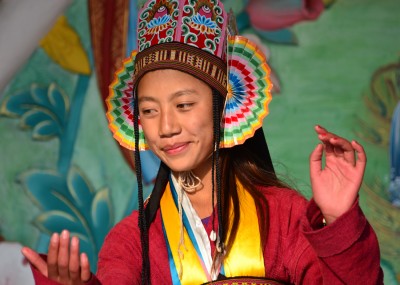